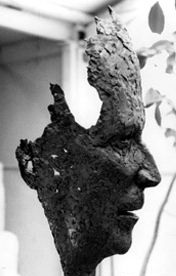 Written on the Door
dated 1908. I have a skin the colour of mules or of red tobacco,
I have a hat made of the pith of the elder covered with white linen.
My pride is that my daughter should be very-beautiful when she gives orders to the black women,
my joy, that she should have a very -white arm among her black hens;
and that she should not be ashamed of my rough, hairy cheek when I come home covered with mud.

And first I give her my whip, my gourd, and my hat.
Smiling she forgives me my dripping face ; and lifts to her face my hands, oily
from testing the cacao seed and the coffee bean.
And then she brings me a rustling bandanna; and my woollen robe; pure water to rinse my mouth of few words:
and the water for my washbasin is there; and I can hear the running water in the water-cabin.

A man is hard, his daughter, tender. Let her always be waiting,
when he returns, on the topmost step of the white house,
and, freeing his horse from the pressure of his knees,
he will forget the fever that draws all the skin of his face inward.

I also love my dogs, the call of my finest horse,
and to see at the end of the straight avenue my cat coming out of the house accompanied by the monkey….
all things sufficient to keep me from envying the sails of the sailing ships
which I see on a level with the tin roof on the sea like a sky. 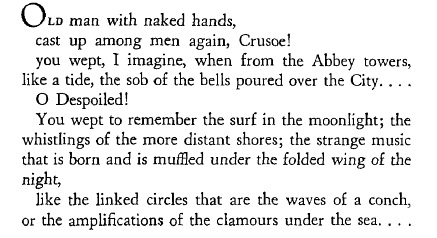 Pictures for Crusoe, The bells.
(translated by Louise Varèse)

To celebrate a Childhood
dated 1907. 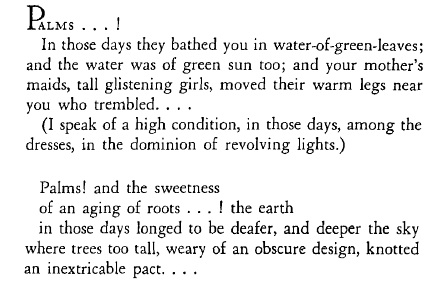 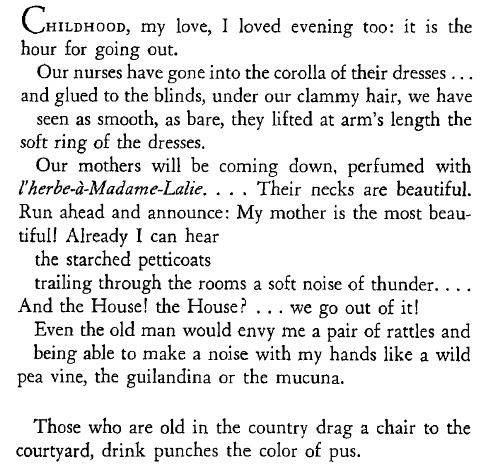 The Glory of Kings

This collection was revised across several editions published by Gallimard in 1911, 1925, and 1948. It is made up of five poems : Recitation in Praise of a Queen

Recitation in Praise of a Queen, I.
(translated by Louise Varèse)

Friendship of the Prince 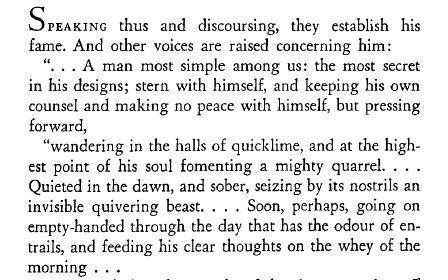 Friendship of the Prince, II.
(translated by Louise Varèse)

Song of the Heir Presumptive 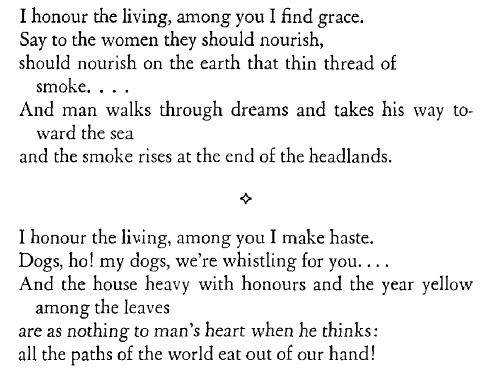 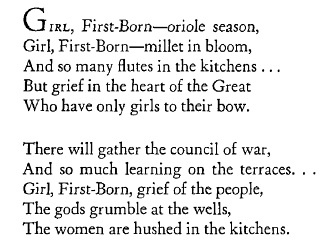 We shall not dwell forever in these yellow lands, our pleasance…

The Summer vaster than the Empire hangs over the tables of space several terraces of climate. The huge earth rolls on its surface over-flowing its pale embers under the ashes – Sulphur colour, honey colour, colour of immortal things, the whole grassy earth-taking light from the green sponge of a lonely tree the sky draws its violet juices.

A place of stone of quartz ! Not a pure grain in the wind’s barbs. And light like oil. – From the crack of my eye to the level of the hills I join myself, I know the stones gillstained, the swarms of silence in the hives of light ; and my heart gives heed to a family of crickets…

Milk camels, gentle beneath the shears, sewn with mauve scars, let the hills march from under the facts of the harvest sky – let them march in silence over the pale incandescence of the plain ; and kneeling at last, in the fantasy of dreams, there where the peoples annihilate themselves in the dead powder of earth.

The Exile collection was published in Buenos Aires in 1944. It is comprised of four poems : Exile 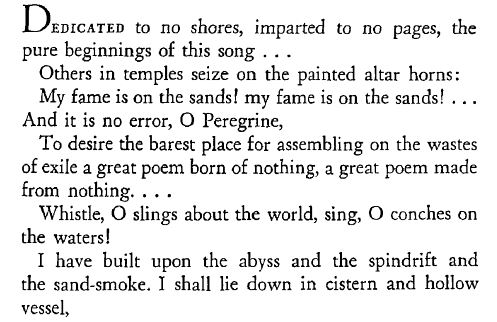 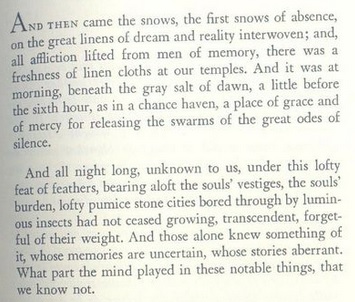 Poem for a Foreign Lady 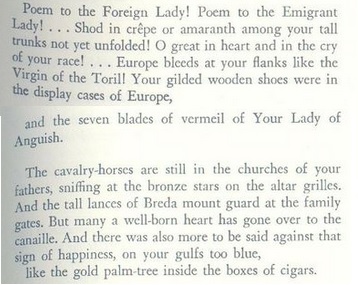 Poem to a Foreign Lady, III.
(translated by Denis Devlin)

Winds
The poem Winds published by Gallimard in 1946. , was written 1945 at Seven Hundred Acre Island (Maine). 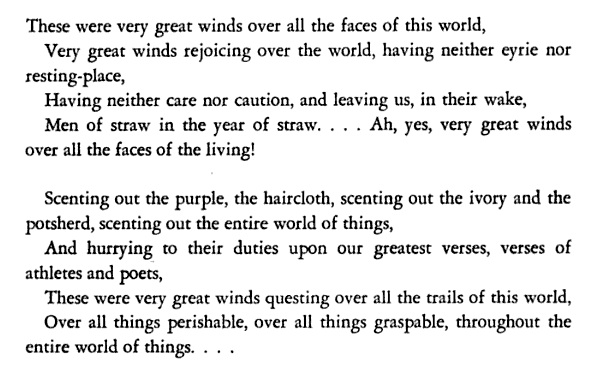 Winds, I,1.
(translated by Hugh Chisholm)

This long poem, dated 1953-1956, was composed between 1947 and 1956 in the United States and the Lesser Antilles (Virgin Islands, Trinidad and Tobago, Saint Kitts et Nevis). It was published by Gallimard in 1957.

Narrow are the vessels, narrow our couch.
Immense the expanse of waters, wider our empire
In the closed chambers of desire.

Summer enters, coming from the sea. To the sea only shall we say
What strangers we were at the festivities of the City, and what star rising from undersea festivities,
Hung one evening, over our couch, on the scent of the gods.

In vain the surrounding land traces for us its narrow confines. One same wave throughout the world, one same wave since Troy
Rolls its haunch towards us. On a far-off open sea this gust was long ago impressed…
And the clamour one evening was loud in the chambers: death itself, blowing its conchs, could not have been heard !

Seamarks, “Narrow are the Vessels” I
(translated by Wallace Fowlie)

Saint-John Perse wrote Chronicle in Giens in 1959. It was published in 1960 by Gallimard.

« Great age, you lied: a road of glowing embers, not of ash… With face alight and spirit high, to what extreme are we still running ? Time measured by the year is no measure of our days. We hold no traffic with the least nor with the worst. Divine turbulence be ours to its last eddy.

« Great age, behold us on our limitless ways. Cracking of whips on all the passes ! And a loud cry on the height. And this great wind from elsewhere meeting us, a wind that bends man over the rock like the ploughman over the glebe.

Birds
The original edition, entitled The Order of Birds, was published in Paris by the Vent d’Arles 1962, with original color lithographs by Georges Braque. Signed « Washington, March 1962 », the poem was written between 1958 and 1962.

Birds, birds held by long affinity close to man’s frontiers… Behold them armed for action, like daughters of the spirit. Behold them here for the trance and prelude to creation, more nocturnal than the great night of clear dream where the logic of dream holds sway over men.

In the maturity of an immense text always in formation, they gave ripened like fruits or even more like words: at one with an original sap and substance. They are indeed like words in being magically changed: nuclei of force and action, sources of lightning and radiation, bearing afar initiative and premonition.

Song for an Equinox

This collection, published posthumously in 1975 by Gallimard, brings together four poems : Sung by One Who Was There 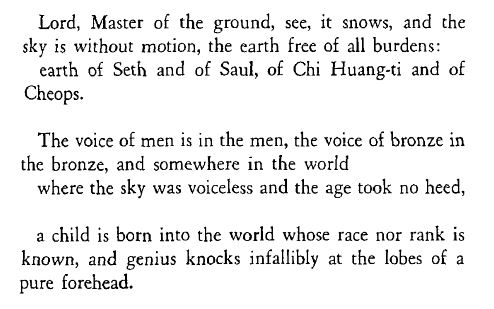 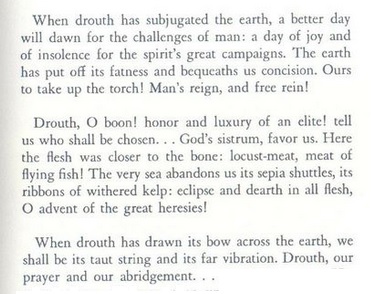