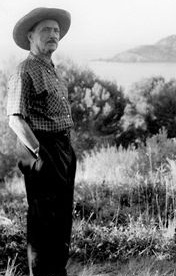 Saint-John Perse (1887-1975) is the author of an exceptional body of poetry for which he was awarded the Nobel Prize for Literature in 1960.

His life spanned the globe, from a childhood amid three sisters in Guadeloupe, to Asia and America and ultimately back to southern France.

When Alexis Leger was 12 years old, he left his childhood paradise in the Caribbean and moved with his family to France. Losing his father soon afterward, he turned to poetry to assuage his sadness. He was fortunate to meet poets Francis Jammes and Paul Claudel at an early age.

Pursuing a career in the foreign service, he served as a diplomat in China where he wrote Anabasis in 1917, a poem that won immediate acclaim. He did not publish any other works until 1940 when he was exiled by the Vichy government and welcomed by the United States. There he wrote a series of major poems: Exile, Winds and Seamarks. In 1957 he returned to France for the first time, settling in Giens, overlooking the Mediterranean, where he died in 1975.

Saint-John Perse’s poems depict a nomadic hero and a sense of wonder about the world and about nature. They mirror the four principal periods of his life : the Caribbean, Asia, America and Provence. Each of these places was a source of creativity for him, a site of discovery and adventure but also of loneliness and exile. It is not surprising that Saint-John Perse’s writing embraces all of human knowledge, given his belief that poetry is not just a way of knowing but also way of living in the world.

The Saint-John Perse Foundation brings together literary and diplomatic resources from past and present in the Bibliothèque Méjanes in Aix-en-Provence.