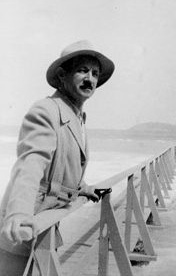 More than 390 manuscripts trace the poet’s revisions from first drafts and exquisitely-calligraphied finished manuscripts to typescripts and proofs. The poems are catalogued individually by title; prose works are catalogued by genre: biography, speeches, tributes, notes. The collection features some fifty manuscripts by other writers, including Paul Claudel, René Char and Francis Ponge.

Some 4600 letters from Saint-John Perse/Alexis Leger and his wife, Dorothy Leger, attest to their lively exchanges with writers, critics, scholars, translators, editors, artists, scientists and diplomats. The earliest letters date back to his childhood. There is correspondence with innumerable prominent figures, including Jacques Rivière, Yves Bonnefoy, Pierre Mendès France, Rainer Maria Rilke and T.S. Eliot. In addition there are more than 1500 exchanges with lesser-known individuals and organizations. Diplomatic files assemble Alexis Leger’s correspondence during his years of public service, 1914-1940.

Saint-John Perse's library included 3329 books, many of which are inscribed and annotated. A quarter of the documents are in English, reflecting his many years in the United States. While some volumes have bibliophilic interest, most are valuable for the light they shed on the poet himself. Ranging across the Dewey decimal system, they reflect the breadth of his curiosity. Works about the Caribbean, Asia and the United States are grouped into three clusters, since it is preferable to keep them together.

The private library includes literary journals that were owned by the poet and his wife. These 708 volumes represent more than 80 different publications such as the Cahiers du Sud, New French Review, Fountain and Planet.

The Foundation houses an important photography collection, with 4463 photographs, photographic plates and post cards that have biographical and historical significance. Examples are post cards illustrating late 19th century Antillean crafts, photos of the Gobi desert in 1921, and portraits of the poet by Lucien Clergue and Gisèle Freund.

Saint-John Perse owned 500 works of art and 484 other objects — writing instruments, medals and awards, flags, clothing, fabric, ship models and weapons. It ranges from his own childhood sketches to portraits of him by various artists. The collection includes paintings, drawings and sculpture, primarily from the 20th century, maps, antique engravings, and objects of Asian art. A collection of works by artist friends André Lhote, Marie Laurencin, André Dunoyer de Segonzac and Georges Braque has been enriched by 15 gifts from contemporary artists.

As a passionate fan of music, Saint-John Perse was deeply attuned to Igor Stravinski and Edgar Varèse. His rhythmic poems have inspired more than 40 musicians from the 1920s to the present. Among the 300 documents in this collection are the poet’s personal record collection, adaptations of his work by composers such as Darius Milhaud and Paul Bowles, the poet’s speeches, and various documents about him. The collection includes records, CDs, audio cassettes, videos, CD-Roms and musical scores.

Numerous other documents also figure in the collection. In the early years of his exile, the poet-diplomat was a consultant on French literature at the Library of Congress. Press clippings from those years often sparked images that later appeared in his poetry. Saint-John Perse filed clippings, often from the New York Times and National Geographic, into 140 meticulously labeled folders.

There are 60 boxes and folders of press clippings about the poet and his work. Twenty-one of them were assembled by the poet himself; the others by his wife and by the Foundation.

The poet and his wife assembled some 50 personal files and 20 literary files. Many of the literary files relate to the publication and translation of his works. They also include notes, letters and clippings about such varied questions as his citizenship, his house in southern France, his poems and his Nobel Prize.

Sixty-five diplomatic files include press clippings, notes and letters concerning Alexis Leger’s career between 1914 and 1940. Topics include his stay in the French Embassy in Peking from 1916 to 1921; Aristide Briand; Europe and the League of Nations; the Quai d’Orsay between 1933 and 1940; World War II and Charles de Gaulle.