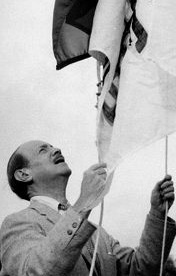 The Foundation has several goals : The Foundation is primarily a conservatory of the writer’s archives. A research library was later set up around the initial donation. Equipped with an exposition space and a lecture room, the Foundation also functions as a place of liveliness and creativity, open to all forms of art. There is also a shop which facilitates the distribution of publications about the poet, including catalogs and magazines published by the Foundation.

A poet “whose soul had no home”, Alexis Leger (pen name Saint-John Perse) devoted his last years to gathering the complete volume of his work at and compiling his literary and diplomatic archives. Having lived in the region since 1957 on the peninsula of Giens, and without a direct heir, Saint-John Perse and his American wife Dorothy gave the entirety of their collections to the city of Aix-en-Provence in 1975 . A Foundation was created in order to conserve these exceptional archives and to share them with the public. The collection has been enriched with the additions of the following acquisitions and donations :

The Library of Congress as well as several French cities (Aix-en-Provence, a city on the French Riviera, being one of them) had made known their desire to obtain the archives. A faithful spectator of lyrical art, Saint-John Perse was aware of the cultural and academic reputation of Aix-en-Provence, as well as the presence of American tourists, the elegance of the architecture, and the Gallo-Roman heritage of the city. His friend Pierre Guerre (writer for Cahiers du Sud, lawyer, collector, and donor to the Museum of African and Oceanic Art of Marseille) as well as Félix Ciccolini, then Senator-Mayor of Aix-en-Provence, incontestably influenced the choice of Aix-en-Provence.

First housed in the Hotel de Ville (town hall) of Aix-en-Provence, since 1989 the Foundation has been housed in the interior of the Cité du Livre, next to the municipal Mèjanes Library. Other heritage collections are conserved here, such as the celebrated library of the Marquis of Méjanes, bequeathed to the Provence region in 1786 as well as documents left by another winner of the Nobel Prize in literature : Albert Camus. The Citè du Livre offers a beautiful example of rehabilitation of industrial architecture of the 19th century. This cultural center, which used to be a match factory, today is situated in the heart of Sextius-Mirabeau – one of the most outstanding achievements in the downtown area – in proximity to several other important cultural buildings : the Pavillon Noir (Ballet Preljocaj and National Choreographic Center of the PACA region) and the "Grand Théâtre de Provence" (a major theater for the region).

A private organization with public use, The Foundation is administered by a board of directors composed of notable French and foreign people belonging to both public and private organizations, with intellectual and economic backgrounds. A nephew of the poet sits on the council as well.

The Foundation's resources come from :